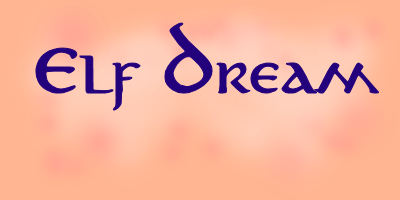 «Elf Dream» is a social group which exists into several virtual worlds. Its purpose is to offer the experience of the immersion in a world of beauty and warm relationship. To connect together everybody interested in the «Elvish» ideal of an harmonious and free social life, into nature, beauty, friendship, freedom, humour, etc. The theme of the Elfs is excellent for this, since «Nice places attract nice people»!

Elf Dream is building a network of friends and virtual places, to be ready to welcome new people who never went into virtual worlds before.

Every friday, 12pm SLT (19hTU), Elf Dream Meetings and storytelling, in our virtual region Lysaer (How to enter)

Elf Dream has its site, it is active in the virtual worlds Sovaria, Alternate Metaverse, and present in Second Life, Mewe, Discord, Facebook.

The group «Elf Dream» is active in the virtual worlds and present in Second Life, Mewe, Discord, Facebook. If you are in one of these, I encourage you to join these groups, in order to keep contact whatever happens.

☻ Virtual worlds appeared about in 1996. Like 3D video games, they allow for our immersion in a computer-generated world, via a viewer, while interacting with other users. But to the contrary of video games under strict ideological control, virtual worlds allow us for a total freedom to set our own purposes, styles and activities.

☻ Elf Dream uses these qualities to share the experience of the immersion in a world of beauty, and to foster a better world, with the propitious theme of the Elves.

☻ Second Life started in 2003. What they offered, still unique today, is in-world social tools, and also appropriable building tools, for user-created content. This made of Second Life the most successful virtual world, still until today. Elf Dream did not existed by the time, but there was in Second Life a very successful Elf group called Elf Circle, with a good egregore.

☻ However, starting 2008, the excruciating costs, the erratic policies of the direction, and a large denigration campaign in the media stopped the exponential growth of Second Life, chasing about all professional activities, and reducing its scope mostly to leisure.

☻ Inworldz started as an Open Sims world, and soon became by far the largest and most successful of them, thanks to its abiding to laws on Intellectual Property, which allowed for a variety of good quality content creators. This is where Elf Dream got its name and started to appear as an independent group.

☻ It quickly appeared that the Open Sims simulator software was very buggy. So the Inworldz developers wanted to bring corrections. But the Marxist Open Sims developers team refused these contributions!

☻ So Inworldz continued the corrections on its own simulator. It was so extensively rewritten, that it was renamed Halcyon. It is of much better quality than Open Sims, and even than Second Life.

☻ In 2018, Inworldz closed, due to about three causes: 1) drama and bad decisions, 2) relentless denigration by some Open Sim fanatics, 3) a bug called immutable asset, which made the data unrecoverable. This was a huge grief, and the loss of ten years od invaluable artistic creations.

☻ The Halcyon code was made open source and put on Github. Today 2020, some new worlds are restarting based on Halcyon, and projects exist to make them work together.

☻ Virtual worlds being a space of freedom, they of course are denigrated, sometimes brutally suppressed, as in 2001 the Deuxième Monde. Silent hostility continues since, from all sides of the political spectrum. We can do without these imbecilities, but in the meanwhile it is important to support endeavors like Elf Dream, and their mean of existence like Halcyon, because the system will never do.

Map of the site: 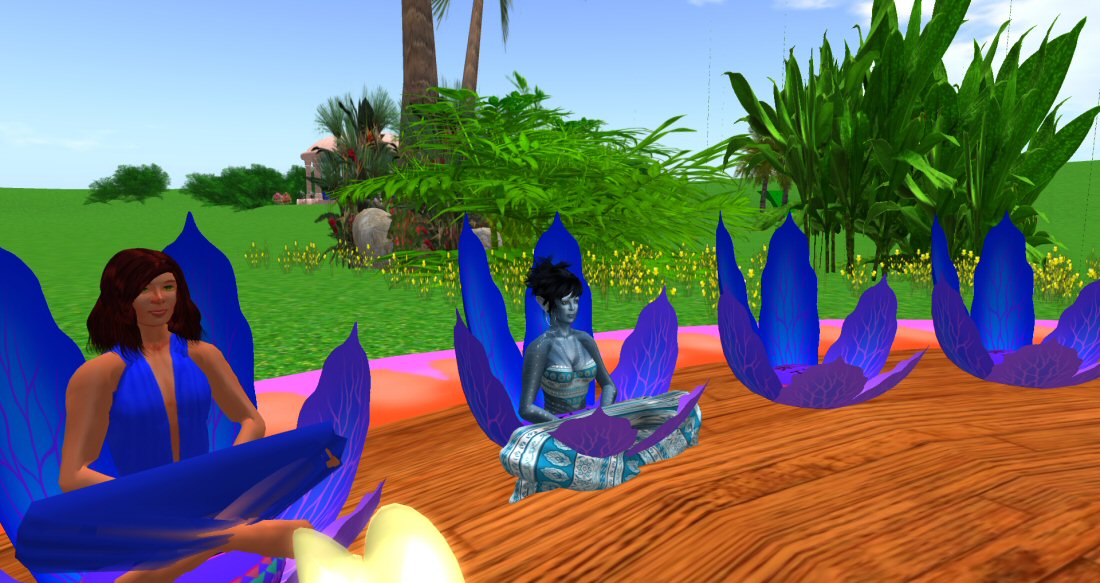 Our new living place: Lysaer, as it was in in Enchanted (closed by the fault of cybercriminals) 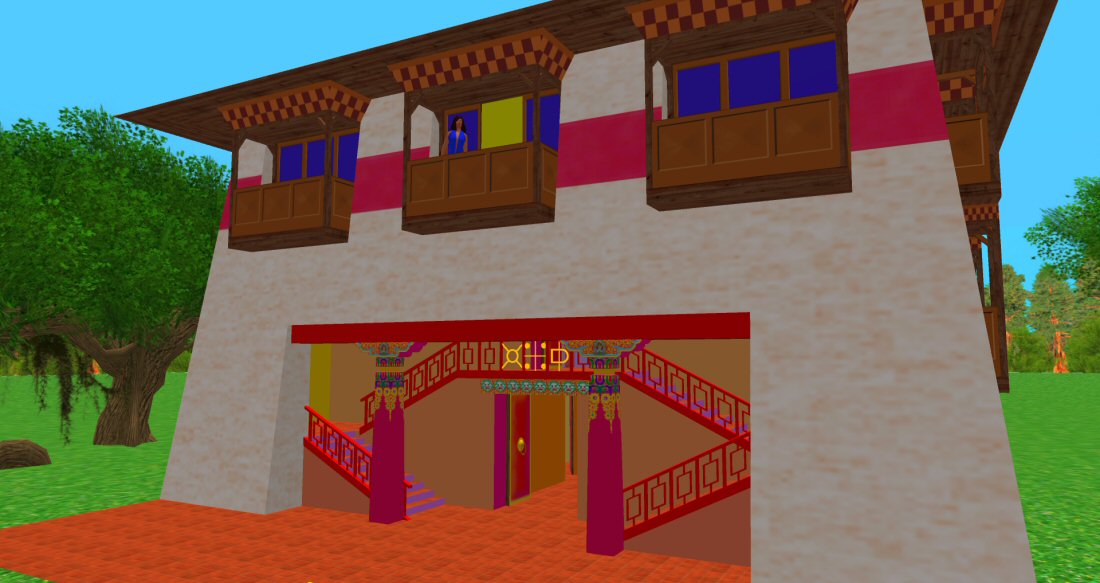 A Tibetan style building, for our science activities: Lysaer, in Enchanted (closed by the fault of cybercriminals) (How to enter). 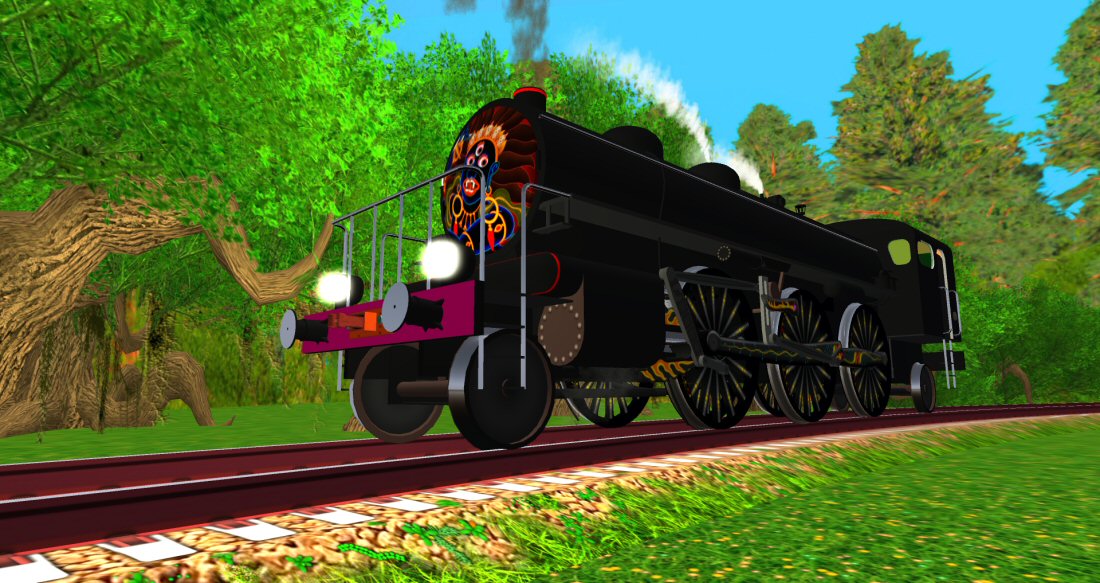 This time the trains restart in BIIG: Daur Lysaer, in Enchanted (closed by the fault of cybercriminals) (How to enter). This thing runs and have all the rods animated. Still a work in progress, thought. 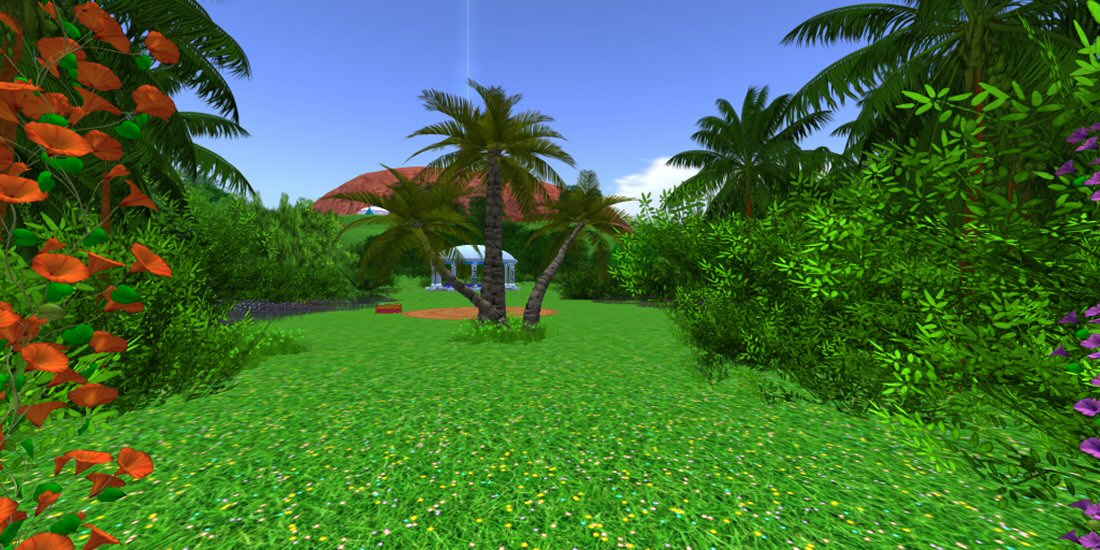 Daur Anarie, in Discovery Grid (Open Sims) before I was chucked out without any explanation. (How to enter). A square kilometer of tropical paradise islands! However I am not so much satisfied with Open Sims, which does not allow all the activities I envisioned. 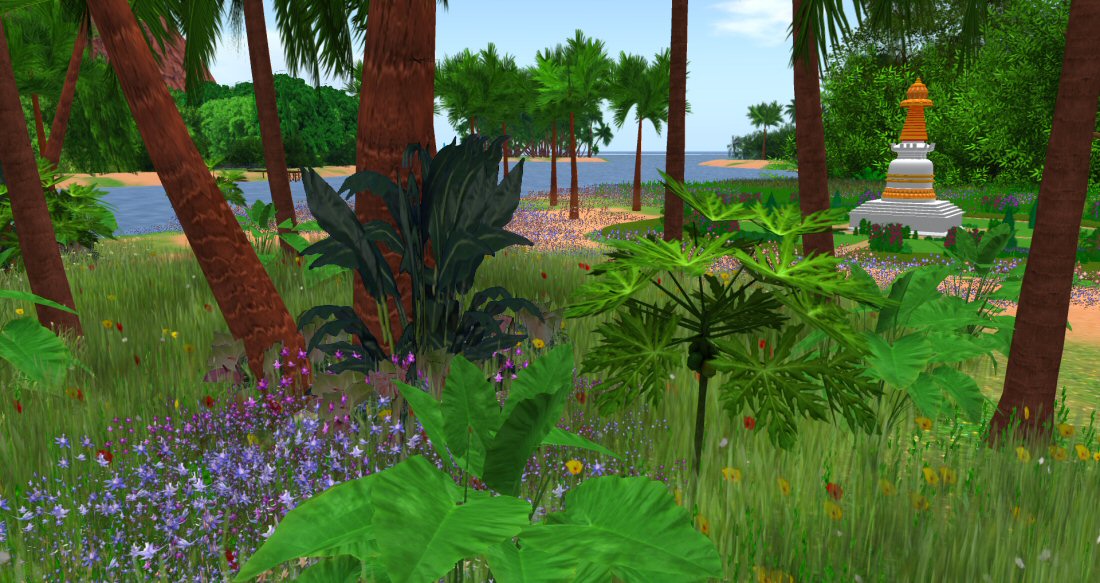 This Buddhists stupa found a suitable setting: Daur Anarie, in Discovery Grid (Open Sims) before I was chucked out without explanations. (How to enter).

The blog of Rosa Dagostino 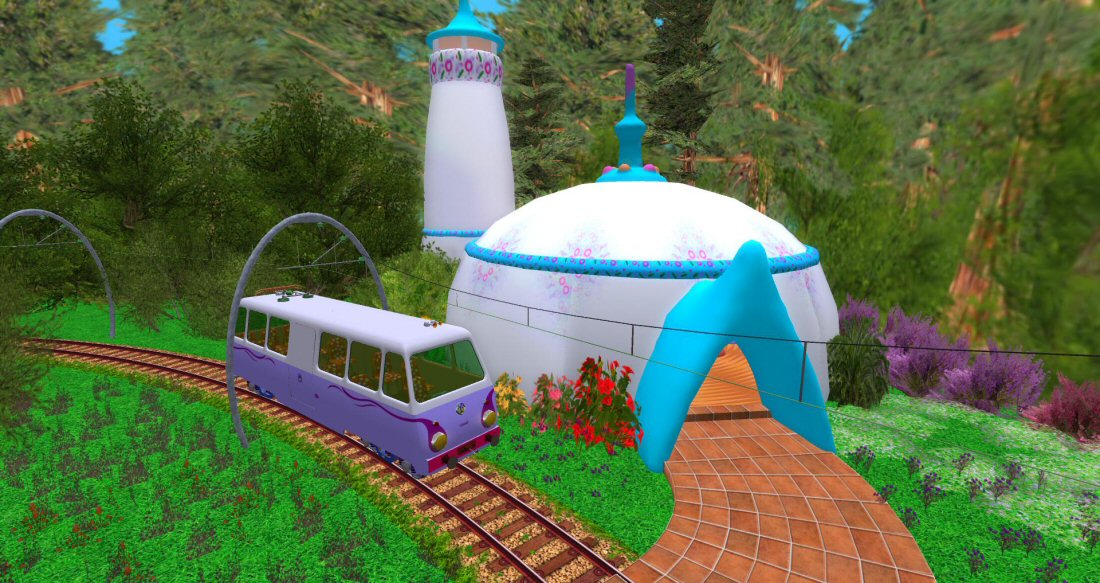 This scene was created in 2015, but it was hosted since by a friend, Shanta, in Inworldz. This temple is a temple of MakTar and Shelenaë, as in my stories of the elfs of the Dauriath. 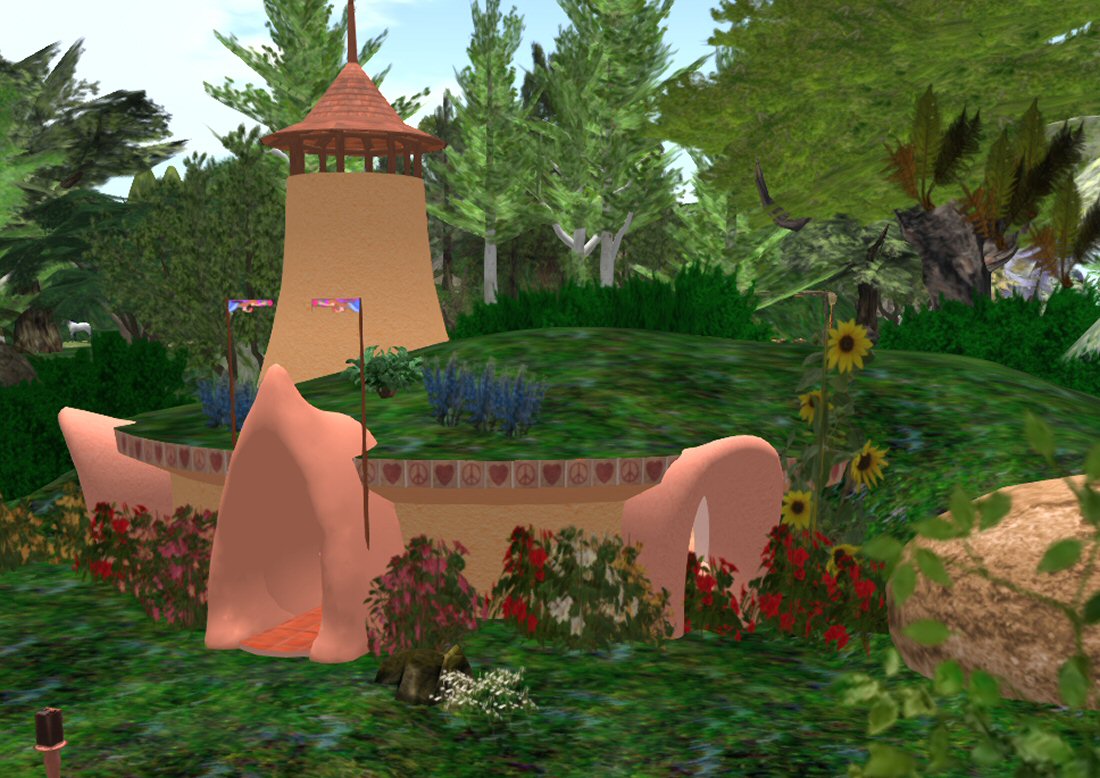 Our hangout place, in Vanya Sulie, into the dearly missed Inworldz virtual world. This troglodytic house wass much larger than it looked, with five large rooms, each for a different activity. Thanks to Fleure Homewood for hosting us for such a long time!

This video was shot in emergency, only some hours before Inworldz disappeared. It shows the four simulators of «Relay For Life», a charity which gathers funds for the research against cancer. This was a team work, where my contribution was the train of course, but also the pink marble gazebo.

An excellent video from Prim Perfect, on the Hope Village, the instalment of Relay for Life in Inworldz. We also see the same train and gazebo. More the miniature trains for Dinkies, at 8minutes30, an installation by one of my friends Etheria Parrot. And at last the London Bus animated with my interpolators, at 11minutes40. DW349 - RFL in Inworldz from Richard Elen on Vimeo.

Video: this second Elven village was build for the 9th birtday of Inworldz, and it remained several months on line. Further we visit the elven village itself. I could add several types of new houses, entirely in mesh. 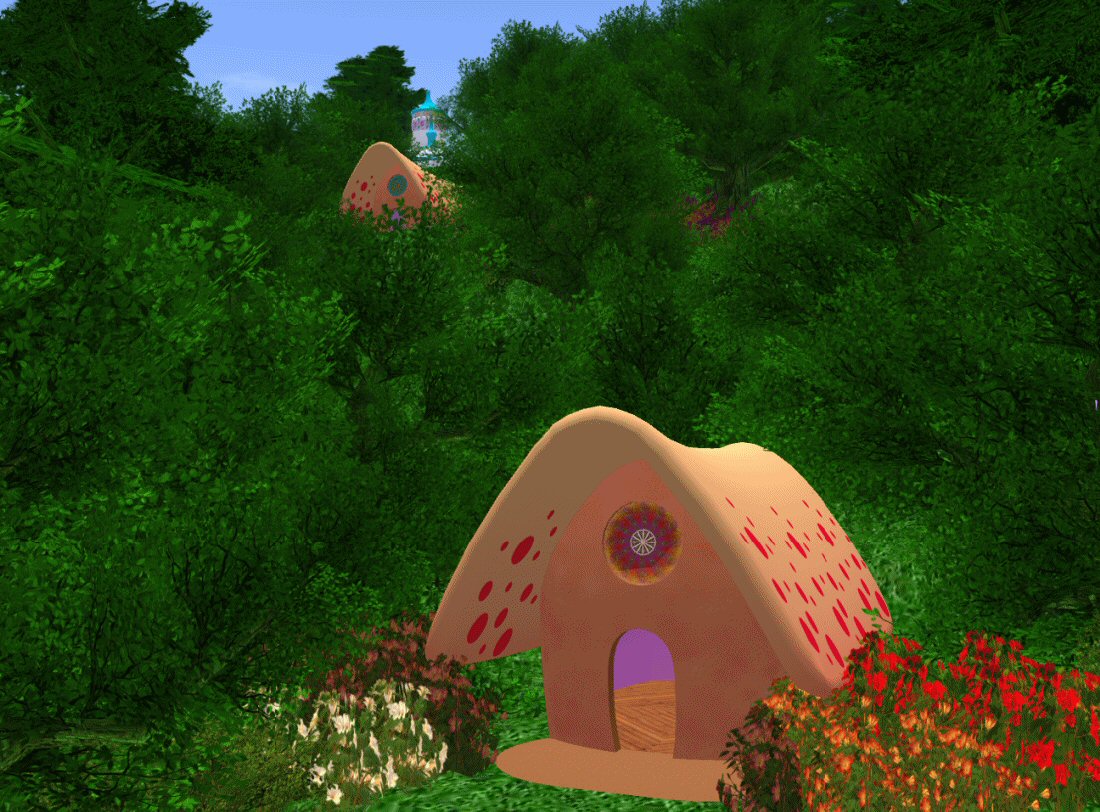 This new house, entirely in mesh, was built especially for the IW9 elven village. I had no time yet to texture it, so I used existing textures. Note the realistic hill, not the cartoonish «Second Life mountains»

Video: this Elven village was build for the 8th birtday of Inworldz, and it remained several months on line. We were allowed to build in dedicated places. As this was too big a work to complete in time, I reused ancient builds, which appear as lower quality today. But I still could do the small elven homes (under the trees) with top level quality: mesh, smart texturing, etc. Enjoy this visit, and the immersion in a beautiful world, while hearing some nice inspiring New Age or space ambient music here.

Video: This is a project for a large elven temple, into lands which would be entirely consecrated to Elf Dream. This project remained visible for two or three months thanks to the initiative Inworldz Cultural Endowment (ICE)

Video: Inworldz Fall Fest 2017. This time my train goes through four simulators dedicated to various creators. My contribution is the simulator with the factories, especially a demonstration of the GORTAX industrial robot.

Video: Model Train narrow gauge Winterfest 2014 This was the first train layout on an entire simulator. This layout was in narrow gauge (600mm) and the first realisations using meshes. It remained several years on line, thanks to the LGBT group «Caribou».

Video: Model Train metric gauge in Inworldz winter gala 2015 This realization had a very realistic look. I remained attached to it.

Video: Model Trains in Inworldz ICE 2015 First experience with «real» big trains. This railcar was a specific demand for transporting passengers in an urban setting.